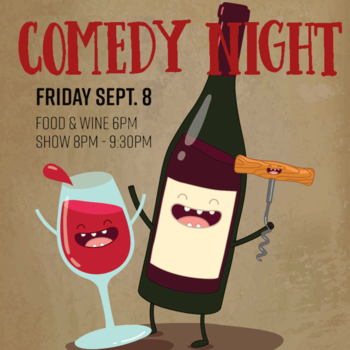 Mark your calendars for a night of fun and laughter!

Dashe Cellars will be introducing a brand new experience at the winery. Join us for Live Music, Comedy, and your favorite Dashe wines.

5.30-on:  El Tonayense Food Truck and their delicious Tacos
6-8 pm: Eric Eckstein in the Cellar
8-9.30 pm: Comedy Show! Check out our Comics' bios below

Each ticket includes the concert, the comedy show and one glass of wine per person.

We hope to see you there!

Nicole Calasich is a comedian and producer from SF who has literally never bombed.* Her jokes have been on Comedy Central, her face on ABC for Iliza's "Forever 31." Her humor is big words smartcool and her incisive audience rapport is the dumbest. You may have seen her open for the utterly fantastic Dan Cummins, Adam Newman, Ali Wong, or featuring for Iliza but she is most likely to be seen offering gifts to the great and powerful Xenu.

Drew Harmon is a standup comedian and former TV Weatherman in San Francisco. Drew began doing standup in the Midwest before moving to San Francisco, where he works at clubs like the Punch Line, Doc’s Lab and more. Drew has also appeared as part of comedy festivals at SF Sketchfest, Gilda’s Laughfest in Grand Rapids, Michigan and Laugh Your Asheville Off in North Carolina. Drew has also worked with Jimmy Pardo, The Nightly Show’s Ricky Velez, Owen Benjamin and more.

Steve Ausburne’s first attempt at actual stand up comedy ended with him getting a lifetime ban from a church in Grant’s Pass, Oregon. Launched by that successful start, Steve now peddles his comedic wares throughout California’s Bay Area in addition to producing a monthly showcase in Healdsburg - where wine country goes to hear poop jokes. Steve has performed in SF Sketchfest, competed in the San Francisco Comedy Competition, and is allergic to cats.

Richard Sarvate grew up in the Bay Area to parents of Indian immigrants. His last name sounds Mexican because it was butchered during an immigration debacle. He spent 10 years working as a programmer before deciding to throw off the shackles of corporate life. Now he spends his nights on stage poking fun at his previous career. His jokes range from an impression of a GPS for insecure men to deep and introspective subjects like his mother's schizophrenia. He's a regular host at the San Francisco Punch Line, been in SF Sketchfest, and he recently completed a 20 show tour of India.

Justin Lockwood's revealing stories and clever insights have made him a favorite of audiences around the Bay Area and beyond. His act spans from growing up on a marijuana farm to raising his own son to dating as a single parent. He's performed at the Burbank Comedy Festival, the Ventura Comedy Festival, is a San Francisco Funny Fest champion, and has been featured at Comedy Day in Golden Gate Park. You can see him regularly at clubs and venues including The Throckmorton Theatre, The Set Up, Comedy Oakland, The Punchline, The Improve, Rooster T. Feathers, Rock Wall Winery and others. In addition to standup he has written multiple plays and starred in dozens of theatrical productions.